The Neighbourhood Air blog has been developed into an online media art project;
See www.neighbourhoodair.co.nz 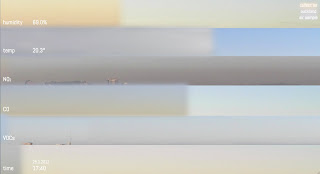 The colour bars represent five weather and gas measurements including (from top to bottom) relative humidity, temperature, Nitrogen Dioxide (NO2), Carbon Monoxide (CO) and Volatile Organic Compounds (VOCs). When the bars reach the far right of the screen the air quality is poor. The sixth bar represents change over time over two days to the current reading of air pollutant levels by scrolling along the bar. Neighbourhood Air is written in html5 so it will also function on a smartphone or ipad. 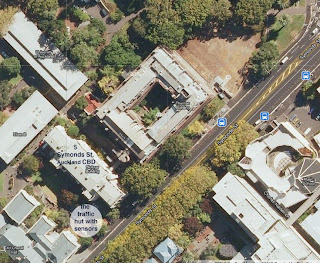 A disused traffic control box on Auckland’s Symonds Street in CBD is currently functioning as an air quality monitoring station. The instruments are operated as part of an ongoing experiment in collaboration with urban meteorologist Dr Jennifer Salmond and Kim Dirks and maintained by instrument technicians from Aeroqual NZ. Numerical data is processed by a server we have built for the instruments and processed into an interface using colour and sound to indicate pollutant level readings. 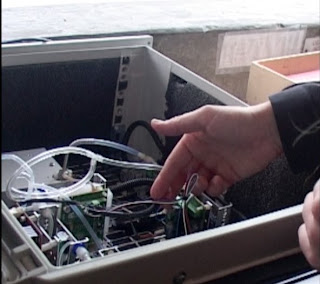 Installation of SM50 VOC sensor by Greer Laing, October 2011.(one of three sensors that drivrs the live movement of the neighbourhood air online interface).

Volatile organic compounds (VOCs) and nitrogen oxides (NOx) often form Ozone (O3) in the photochemical reaction of primary pollutants associated with photochemical smog. VOC pollutants are produced mainly from combustion sources including motor-vehicle emissions, and industrial and domestic use of solvents and coatings as well as from organic sources . See, A Users Guide to Air Quality. (Auckland Council, 2011).